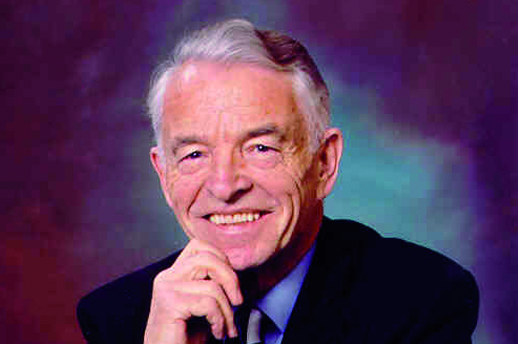 It is with great sadness that we report the death of our founder, Duncan Douglas Foulds Rae OBE who lost his fight for life on Saturday 23rd June 2018 at the age of 87.

Having left school at the age of 16, Douglas entered the service of the North of Scotland Bank at their Greenock office quickly moving up the corporate ladder.

National Service soon beckoned and what he initially, jokingly perceived as “hard labour”, actually transpired to be one of the happiest periods of his life. He was afforded every opportunity in the RAF to strenuously pursue his two great passions; golf and football.

Whilst in the RAF, Douglas continued to study for his final exams in banking and he sat his finals a month after being demobbed. Happily, the outcome was successful and he became the youngest member of the Institute of Bankers. As a result of his examination success, Douglas came under the watchful eye of the bank’s General Manager and a year or two later was moved to the stock exchange of the bank.

At the time, young bankers were poorly paid and married with a wife and two young sons, Douglas realised he could no longer afford to give the banking world the benefit of his considerable services for so little in return. Tired of travelling between Greenock and Glasgow he took the decision to plunge into business on his own. This was much to the initial surprise of his family and banking colleagues.

Douglas formed Golden Casket (Greenock) Limited in 1959 which he initially operated from the back of a van, selling confectionery to retailers.  Douglas remained at the helm for 58 years before retiring. The business has since grown to become one of the largest confectionery manufacturers in Scotland with family values still being the core. His son Crawford, now the Managing Director, his son-in-law Dave Finch, Operations Director and three grandchildren, Stuart, Martin and Carly all playing key roles within the business.

With a sporting career which has been every bit as illustrious as his business exploits, Douglas’s activities in this arena warrant significant mention. Having held highly successful golfing administration positions at both club and county level since the early 70s, Douglas was asked in 1984 to join the Scottish Golf Union as representative of the Renfrewshire Golf Union.

His dedication and direction were soon rewarded with numerous subsequent top appointments which included President of the Scottish Golf Union (1993-94), Director of the Golf Foundation (1997-2002) and Course Rating Chairman for the European Golf Union (27 Countries from 1995-1997)

On a purely voluntary basis, Douglas served for over 29 years in golf administration.

In 1998 Douglas was awarded the Torch Trophy for Services to Golf which was presented to him by His Royal Highness, Prince Edward, the Duke of Kent.

In 2001 Greenock Morton Football Club was plunged into administration. As a lifelong supporter and ex-director of the club, he was fully aware of the impact it was having to the morale of the local community, so much so that Duncan McNeil MSP raised this point in parliament.

The Administrators for some months were unsuccessful in finding a buyer and the club was about to fold. Having been a Morton supporter for over sixty years Douglas could not sit back and watch his beloved club become a statistic especially when he witnessed the fight and passion from the local people who were desperately seeking their white knight.

He purchased the club from the administrators at the eleventh hour and promised the supporters that there would be further investment assuming they were to continue with the same level of support they had shown.

Never having done anything in half measures Douglas promised firstly to transform the stadium from a dilapidated state, secondly an investment for players and management staff to ensure ascendancy back up the leagues and thirdly a further investment to introduce a substantial youth programme locally.

All three promises have received a large financial backing and all are very much underway and on target.

Douglas was an active member and former Treasurer of the Greenock Methodist Church. He donated privately and very substantially to the church as well as numerous other local charities.

He claims that it is his faith which motivates him in everything he does.

Douglas was married to Adrienne for 61 years and they have three children – Alastair, Crawford and Gillian who have provided 10 grandchildren.

In 2016, in the Queen’s Birthday Honours List, he was awarded the Order of the British Empire which he received at Buckingham Palace from His Royal Highness, Prince William, the Duke of Cambridge.